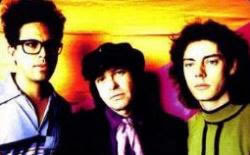 We are starved for more brilliance by one of the best Power Pop bands there ever was, the Wondermints. Though recently best known as Brian Wilson's backing band (leader Darian Sahanaja is credited with convincing Brian Wilson to finally re-record and release his concept album "Smile"), each or the Wondermints CDs feature amazing melodies informed by a fascination with California 60's pop. In their history, they have released only four CDs:

Each of these are absolutely essential, however all but "Mind if We Make Love to You" are out of print at this point. Somebody needs to re-release these gems, and soon!

Several years ago, there was a set of MP3s in shareland of songs from their "Colored Tape Demos" that didn't make the Self Titled Debut release. More info on that from the All Music Guide review below:

"Throughout the early '90s, the Wondermints recorded a bevy of exceptional homemade demos and small indie singles primarily in co-founder Darian Sahanaja's bedroom studio. Slowly but surely that music circulated through the Los Angeles underground music scene on a series of semi-legendary tapes identified solely by their colors. The band's music, however, still flew under the radar of the music business until the Japanese label Toy's Factory picked up the slack, releasing an eponymous debut in 1995 that cherry-picked the very best songs from those original tapes."

The longstanding Wondermints Fan Site provides more details about which demo tracks were chosen to comprise their debut CD and which were left off.

I've collected many of the left-off demos and b-sides in the link below. Most of these tracks don't sound terrific and I am missing a few tunes (I purposely left off a set of 6 hissy live in-studio cover tunes that never sounded like they belonged with the rest of the more finished tracks). I think that these tracks are absolutely outstanding, a must hear. I know that I'm missing a few tunes - so if anyone has better versions or a more complete set, please let me know.... Hopefully there will be an official re-release of their debut someday enhanced with these "extra" tracks. I'll be standing in line...

Listen to the Colored Tape Demos and let me know if you find these tunes as amazing as I do!
As a bonus, go check out the excellent Power Pop Criminals blog for a link to a great unreleased Wondermints concert CD from Japan.
Posted by Haper at 7:35 AM 3 comments: 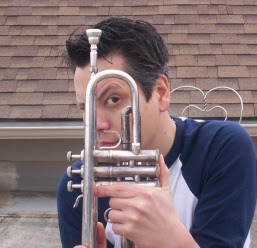 ...so one of the CDs I am listening to most at the moment is the new one by Eric Matthews, The Imagination Stage . For my money, Eric Matthews has been succesfully traversing the already thin boundary between Power-Pop and Chamber Pop for years.

I first became aware of him as the #2 singer in the band Cardinal. In 1995 and 1997, he created two terrific solo albums, It's Heavy in Here and The Lateness of the Hour. He didn't release another CD of his own for another 8 years thought he did make a number of guest appearances on other artist albums. Since 2005, he's been quite prolific - releasing 2 EPs and 2 CDs in three years. The music is of consistent quality with great singing, haunting melodies and impecible production. Eris also plays classical trumpet well. It reminds you of Penny Lane when you hear it within his Beatles influenced songs (listen to the first song on his debut - Fanfare). I warn you that this music is a bit "serious" for some - but I think that it holds up well with repeated listening.

I've included links to buy downloads of all Eric's officially released stuff below. I recommend all of these. I also included link to a compilation of songs from tributes to help fans complete their collections.