The dB's - Bonus tracks left off of the new album 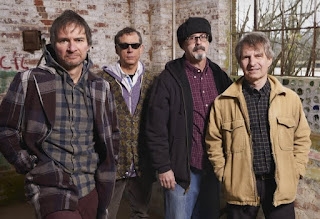 So I am in awe of the great PR job that somebody is doing at dB's Central and Bar None Records. There have been numerous great reviews of this week's momentous release of "Falling Off the Sky" by the dB's. Lots of press (all positive) would cause you to hope that the album will be a smash and finally bring the band the attention it deserves. I don't have a lot more to add other than to echo the comments that this is one of the years best releases, that the dB's have still "got it" and that all of their fans are vindicated for our long suffering devotion.

It was certainly scary about how long this album took to put together. One of the highlight tracks "World to Cry" was available in almost its final form on the dB's website back in 2005! The Will Rigby track "Write Back" as released for Record Store day in April 2011.

Rob on his must-read dB's fan shrine blog points out the dB's are the definition of a cult band. True enough, and as such I would have expected some official channel to distribute some of the great tracks evidently left off the new release. These have dribbled out over the years and die hard fans will probably have picked them all up by now - but for those who haven't, I've pulled them together in one short collection (Rob does a great job commenting on many of these tracks on his post here):

1. Picture Sleeve - Fine DB's track from the Record Store Day single on March 2011. Chris sings. "Write Back" was on the other side.

2. Revolution of the Mind - Peter's rockin' tune about the "Occupy" movement. Released as a download. Went viral and well deserved.
3. If Memory Serves - Great Chris ballad. A rough mix from his future solo record "Lovesick Blues" available on SoundCloud.
4. You 'n' Me 'n' XTC - Terrific Chris pop song. Great song  about travelling listening to one of my favorite bands. Rough mix from"Lovesick Blues" on SoundCloud.
5. The Adventures of Albaross and Doggerel (Instrumental Mix) - A "no vocal mix" from this album track. Released months ago as an album appetizer on the dB's website.


As usual, if I am missing any recent rarities, please enlighten me. dB's fans unite. Its a pivotal moment for this great band.
Posted by Haper at 6:57 AM 6 comments: