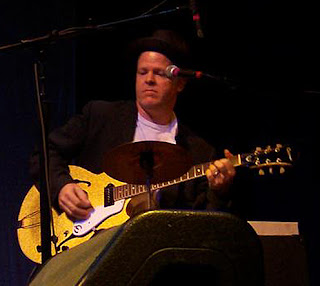 Buddy Judge is an enigmatic figure in the history of Power Pop. Perhaps best known as one of the three singers in the Power Pop supergroup the Grays, Buddy's first recording was in 1988 with his band "The Buddy System". in 1994, he joined forces with Jason Falkner, Jon Brion and Dan McCarroll to form the short lived supergroup "the Grays".   The Grays sole album "Ro Sham Bo" is a personal favorite of mine and of many Power Pop fans.  After the breakup of the Grays, Buddy released his one and only solo album "Profiles in Clownhenge" a quirky concept album about clowns and the circus, scored replete with tubas and calliopes. (Actually though a weird concept, the album is wonderful and well worth looking for.)

Buddy spends the later half of the nineties as an indispensable sideman for Aimee Mann and Michael Penn among others.  He worked with Aimee on her Bachelor No. 2 and Magnolia albums and becomes interested in scoring movies and TV.  And that's what he's been concentrating on since then.   Most recently he seems (along with Jim Boggia) to have been caught up in the burgeoning Power Pop Ukulele scene(!) and he co-leads the The Ukulele Orchestra of the Western Hemisphere group.

Below is a long standing project to incorporate some of the most fun incidental instrumental music from Buddy's along with some rare tracks from his long career.   I've included some of the extra tracks at the end of Buddy's "Profiles in Clownhenge" solo record along with some solo and group demo tracks by Buddy and the Grays.   Loyal Gray fans probably have most of these tracks but perhaps will enjoy the (relatively) new solo tune from 2012 along with the soundtrack material incorporated.  For those new to Buddy, there are lots of great songs to enjoy.  Let's hope we get another installment of great music from this talented musician.