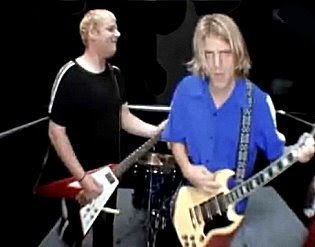 During the late 1990's the Posies were turning out a series of terrific Power Pop albums. At the same time, another Seattle based band was producing great music closely modelled on that prototypical "Posies Power Pop sound". The band "Super Deluxe" was lead by lead singer Braden Blake. in 1995 and 1997, Super Deluxe released two excellent power pop albums. A coincidence was that Braden Blake's voice sounded remarkably similar to Posies leaders Jon Auer and Ken Stringfellow. (I think that Blake subsequently worked with Ken Stringfellow in his "Salteen": project during the couple of years when the Posies broke up - but that's the subject of another post).

Super Deluxe produce great poppy tunes charged with the high energy sound of the bands of that era. They released two excellent albums, "Famous" and "Via Satellite". You can hear "Famous", their excellent out-of-print debut at King Size Mongs fine blog.
After their second CD, 1997's Via Satellite, Super Deluxe faded from sight only to reemerge in 2005 with their fine comeback CD "Surrender". However in 1998 a series of excellent demos for an unreleased third album made their way around. The songs are great and the production excellent and to my knowledge they were never officially released. Enjoy!

..also be sure to check out the 2004 solo album by Braden Blake entitled "A Year in Pajamas". Though much more mellow, its full of memorable Power Pop tunes... and its still in print. 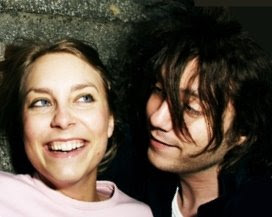 Sweden has produced some of the most sublime Power Pop music of the last decade. And though the heyday of Swedish Pop appears to be over (late 1990s bands such as the Wannadies, the Merrymakers and This Perfect Day are no longer recording), there are still many wonderful sounds coming out of that country. The Moonbabies have updated the classic Swedish fixation with sublime melody by adding contemporary electronica and indie attitude to the mix. They produce gorgeous Power Pop updated with recording techniques that superficially make them sound similar to contemporary Canadian bands such as Stars, Mates of State, or Great Northern. I think Moonbabies' melodies are influenced more directly by the Beatles than those other bands.

Over the last seven years, the Moonbabies have released three wonderful albums and a series of singles, EPs and even some early tapes (does anyone have mp3s of those early tapes?). Last year's album "At the Ballroom" was a gem, but my favorite so far was 2004's "The Orange Billboard”. Just listen to Crime O' the Moon off of that album and tell me you don't hear echos of the Beatles or even CSNY. You can stream most of their recorded output at their record label's popup player. If you have never heard the Moonbabies, you are in for a treat.

You can also download two of their best pop singles directly from their website:
War on Sound
Sun AM

Most of these albums can be downloaded from iTunes, Rhapsody and eMusic as well.

The Moonbabies have always been really great at making b-sides and demos available for a while on their website but they do take them down after a while. As usual, I've compiled a bunch of b-sides and demos for collectors. Most of the songs on the compilation here were made available by the band over the last couple of years. The majority are demos and left-over songs from The Orange Billboard. Needless to say, there are some wonderful tunes here.

Enjoy... and support these two talented artists. Ola Frick and Carina Johansson have lots yet to say.
Posted by Haper at 4:01 PM 1 comment: