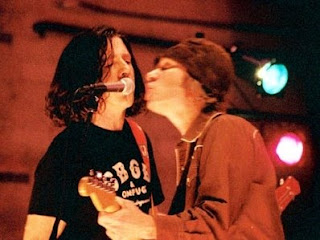 I'm afraid I'm late with this one.... Here is a bonus track and rarities compilation from Dada. These LA based power poppers have released 8 CDs over the years. I'd describe their sound as slick California pop with a strong hint of electric blues. (They are often compared to the Police but I don't hear it). When they are great (and they often are), their hooks rank with the best. Their playing is loud, powerful with amazing harmonies. I recommend checking out each of their releases below. You can find used copies of most of them for cheap.

The tracks in this compilation were compiled from current Internet sources (Dada's website, and other bloggers...). I've also included some hard to find bonus tracks from the 2004 reissues of El Subliminoso and American Highway Flower. Those reissues had limited release and are hard to find now. I only came up with two of the seven extra tracks. (Trust me - you are going to want to hear Dada's version of California Dreamin' one of those extra tracks!) If anyone has the others, would you please enlighten the rest of us? I've also included several rare tracks from side project Butterfly Jones.

Several years ago, the Dada Enthusiast List did a better job on a rarities project like this - but the postings there appeared to have gone cold. Maybe one of you is out there...

Great band. Looking forward to their next release.