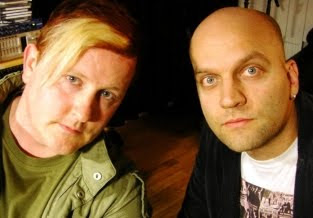 So its early 2012 and I'm still waiting to to hear the entire Soundshine album by David Myhr (only released in Japan as I write this). In anticipation, I was listening to the two albums by his previous band "the Merrymakers".

The Merrymakers were a Swedish Power Pop unit co-lead by David Myhr and Anders Hellgren. Their two albums "No Sleep till Famous" and "Bubblegun" were some of the best examples of Power Pop to come out of the Swedish Power Pop renaissance of the late 1990's. In my opinion 1998's "Bubblegun" is maybe the best single album from that scene, benefiting from the arranging, producing and co-writing of Jellyfish leader Andy Sturmer.

The Merrymakers were only together for a short time. They appeared on the scene in 1992 and released two classic albums (along with one hard to find early singles collection). By 1998 they were gone (The band continued to exist until 2010 but there was nothing released after 1998 - I wonder if there are any good unreleased material from that 1998 - 2010?). Here is a collection of their B-sides and compilation tracks for your listening pleasure. This compilation reminds me of how great this band could be (makes me anticipate David Myhr's Soundshine release that much more).

Thanks to one of my Power Pop friends (you know who you are) for helping me pull this collection together. We would not be listening to all of these great rare tracks without your generosity.
Posted by Haper at 6:45 AM 8 comments: