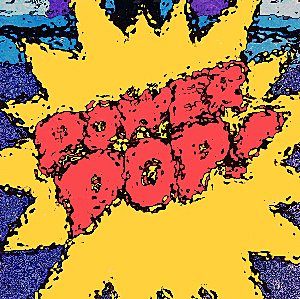 2016. What an absolutely bizarre year!  Here's hoping that 2017 will make more sense all round.  Still there was lots of quality Power Pop produced in 2016.

1. Paul Steel - April & I: Carousel Kites
An end-of-year masterpiece by Paul Steel slips in under the wire.  Paul has been working on this epic during a difficult year for him, but you wouldn't know it.  Those who have followed Paul's past efforts won't be surprised by the Beach Boys and Jellyfish influences. The surprise hre is the trio of Steely Dan influenced tracks in the middle.   Wonderful melodies.  Sterling production.  The best Power Pop album of the year IMO.

2. Seth Swirsky - Circles & Squares
Seth is here with another cycle of new sunshine pop.    Though we've heard a few of these as demos on his web site, Seth has woven new versions together into a tuneful tapestry.  It's all puppy dogs and summer love.  Great album.

4. The Dowling Poole - One Hyde Park
The second full length collaboration by Willie Dowling and Jon Poole.   This one check all the boxes.  Beautiful Jellyfish influenced ballads along snotty punk poppy rockers that sound like they could slot into a bid 90s Blur record.  Another great effort by the dynamic duo.

5. Starling Electric - Starling Electric Company
This Michigan band has two releases in my top 25 this year.  This one is the rocker of the two.  Channeling some of the cues from the shoegazers along side hooks influenced by the Beach Boys.  A great album though out.

6. David Brookings and the Average Lookings -  S/T
David Brookings produces his best effort in years and it rocks hard.  No other album invokes the rocking DNA of early Elvis Costello or early Candy Butchers like this.  I love David's new band.

7. Erik Voeks - So The Wind Won't Blow It All Away
After years of leaking out singles Erik finally puts out an entire album and it is a fabulous effort throughout.  Channeling a more careful take on the mid-west pop made famous by Tommy Keene.  This album takes up right where Erik's 1993 epic "Sandbox" leaves off.  Keep these coming please Erik!

8. The Legal Matters - Conrad
Another great album by the Michigan Power Pop "supergroup" of Andy Reed, Chris Richards and Keith Klingensmith.   I think that this one is actually even stronger than the first.

9. Look Park - S/T
OK,  so there aren't quite as many power hooks as Fountains of Wayne, but when Chris Collingwood sings highly tuneful songs, it sounds like FOW to me.   Some great tracks here on Chris's solo debut.

10. Nick Piunti - Trust Your Instincts
This power pop album may have the most "power" of any album in my top 25 this year.  It also includes the strongest set of tunes that Nick Piunti has produced to date.  Lots of fun to listen to in the car.

12. Peter Bruntnell - Nos Da Comrade
The English folk pop artist returns with his third effort that straddles folk, alternative and power pop.  As always its tuneful and worth listening throughout.  Peter Bruntnell is a criminally underrated and a favorite of mine.

13. Honeydogs - Love & Cannibalism
I'll never miss an album by Adam Levy and his band-mates.   Though this one feels like a somewhat arbitrary collection of tunes, it still contains some of my favorite songs of the year.  Obviously this is a band effort not just another solo project by Adam.

14. Starling Electric - Castlevania
Perhaps the most personal effort on this list. Starling Electric lead singer Caleb Dillon has been sharing this masterpiece within a select inner circle.  He decided to release it for free on Bandcamp this fall so it's available to all of us.  Strong shades of Elliot Smith and the introspective side of Robert Pollard.  Not to be missed.

16. Bent Van Looy - Pyjama Days
I'm a big Jason Falkner fan and every time I listen to Belgian rocker Ben Van Looy, I have to double check to see if I am actually listening to the great unreleased album by Jason.  It makes sense since this is the second album that Jason has produced for Bent.   Though, it doesn't say it, I would not be surprised if Jason had a hand in writing some of these songs.

19. Arvidson & Butterflies - S/T
The most "Swedish" of Power Pop albums comes from Gothenburg Sweden (as it should) this year and its very good indeed. Roger Arvidson delivers an album that sounds like it could have been released in Sweden in the 90s.  Rockin' songs with hooks galore.  So sweet it made my teeth hurt!

20. Sheloom - The Baron Of The Fjord
The second cross-continent collaboration by Blinker the Star singer Jordon Zadorozny, and Italian prog rocker Filippo Gaetani includes an important new member, chamber pop star Erik Matthews.  This a beautiful dense album that you should check out if you haven't heard it.  Spectacular.

22. Greg Pope - Guiding Star
The latest album by prolific artist Greg Pope cast a darker more alternative cast than albums past.  The hooks are here if you listen and stand up to repeated listening..

23. Cupid's Carnival - Everything is Love
I loved this John Lennon-esque collection of pop songs from the band formerly known as "Cherrystone".   Perhaps the most unabashedly late Beatles of anything on this last.

24. Cheap Trick - Bang Zoom Crazy…Hello
Another album by Power Pop dinosaurs Cheap Trick.  Does it matter?  YES is matters.  Some of the best three minute Power Pop songs of the year were on this album.  Great that these guys are still bringing it.

25. The Nines - Alejandro's Visions
This is a retro soundtrack concept by the Nines and it sometimes is a bit too fey for my tastes.   However, Steve Eggers is a force to be reckoned with and always brings us great songs.
Posted by Haper at 6:47 PM

Thanks for the comments and Happy New year Shriner! I had to cut some great releases to fit into my traditional number 25. Some great ones that just didn't make the cut:

Great selection. Didn't know The Explorers Club had a new one out; love it so far. I'd also like to recommend Norwegian power pop band Sweden (heh) and their new release "Oh. Dusty". The Junipers had a good release with Red Bouqet Fair too.

Nice to see Peter Bruntnell get some recognition, although I'm a bit confused with the part "with his third effort that straddles folk, alternative and power pop". Are you saying this is his third effort that encompasses those genres (if so which albums would you consider #1 and #2. Or that this album is his 3rd release (which is incorrect).

Please don't think this is a critisism, I totally agree with all your selections( if not the order) and I too consider Mr Bruntnell "is criminally underrated and a favourite of mine"

I always look forward to this time of the years, if for no other reason than to see what albums have passed me by, it's also interesting to see what different people class as "powerpop",and probably explains why some albums have gone under my powerpop radar, which seems to have a widening spectrum as each year passes.

Keep up the good work,

Glad to hear from another Peter Bruntnell fan. Appreciate the comment. I've been hooked from the start. By my count, Peter has released 10 albums (not counting the Retrospctive album released in 2013). I particularly loved 2008's "Peter and Murder of Crows", an "Americana" masterpiece. The last three studio albums (Black Mountain UFO, Ringo Woz Ere, and Nos Da Comrade) were great but were more varied including tracks that spanned the gamut from folk to Americana to Power Pop. Loved everything he's done.

Thank you for these lists and recommendations. I have found so many great, yet unheralded, artists through Pop Fair.