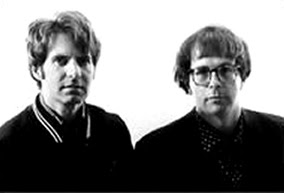 In the 80s, the dB's were one of the best and most influential power pop groups on the scene. They released a round of classic CDs and then faded from view. They have made several attempts since then to rekindle the flame, each sputtering out after a few months.
Exciting news. Former dB's co-leaders Peter Holsapple and Chris Stamey are preparing a new album Here and Now and are performing a few dates in anticipation of its release.
Though I don't have much in the way of rare Stamey Holsapple material together, I did unearth a couple of rare compilations for each of them.
Chris Stamey - Alaska is a compilation of rare singles and an EP released during 1992 and 1993. I pulled these down from the Jeff Giles's classic Jefftoblog blog. As far as I can determine, these files are no longer available. Great stuff that I had not heard before. Highly recommended for Stamey lovers. Thanks Jeff!
After the dB's broke in the early 90s, Peter Holsapple joined the New Orleans based jangle rock super group, the Continental Drifters. Though Peter's then wife Susan Cowsill usually sang lead for the Drifters, Peter sang at least two or three songs on each of their three albums.
Peter Holsapple - Continental Drifter is a collection of the Continental Drifter songs that Peter sang lead on (with one ringer pulled from his solo album). Some great material here. I think "Too Little Too Late" is up there with the best of the later dB's material.
1981 Stands for Decibels
1982 Repercussion
1984 Like This
1987 The Sound of Music
1991 Mavericks (Holsapple and Stamey)
1993 Ride the Wild Tom Tom
1994 Paris Avenue
Posted by Haper at 11:34 AM 6 comments: