New Real Estate On The Way 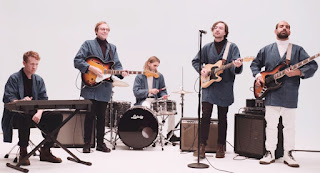 Looking forward to the new album "In Mind" by the band Real Estate due to drop on March 17.  The work of this band along with their lead singer Martin Courtney has turned into a big thing for me recently.   Inhabiting the post Velvet Underground school of rock occupied by such bands as The Feelies and Luna, Real Estate has been releasing fine albums since 2009. Early records were more sparse but as they've matured, the melodies have been brought more front and center.

What vaulted them to the top of my list was the 2015 solo effort "Many Moons" by singer Martin Courtney. I didn't really pick up on this stellar album until last year but its been stuck at the top of my list since,.  in Many Moons, the trademark Real Estate minimalist sound attains a jangly "English Folk" cast and the chord changes and hooks are better than ever. (Reminded me of one of my favorite albums "Three Cheers for the Invisible Hand" by the Philadelphia band The Canadian Invasion).

As a taster before the new album drops, I'm posting a compilation of recent radio studio appearances by Martin Courtney along with some cover songs by Real Estate.  Love this band.   If you don't know them, I'd suggest giving Real Estate a try.