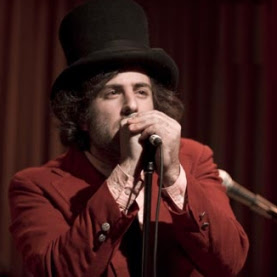 Bryan Scary is a phenom. A scary talented genus who keeps getting better with each release. His latest CD "Daffy's Elixir" took 2 years to make and is absolutely crammed with soaring melody's "Queen-like harmonies" and dizzying array of stop/start breaks. It's really something to hear. I've got a feeling that in December, this one is still going to be battling it out with David Myhr's Soundshine for best album of the year!

Since 2006, Bryan has released three amazing albums and an EP, but "Daffy's Elixir" may be his best. If you haven't heard him, its certainly a great place to start. It's clear from his Twitter post that he is a discriminating fan of all things Power Pop. You can hear influences of XTC, Beach Boys and even a bit of Elvis Costello in his latest. For completists I've collected some recent acoustic radio sessions. They are great but don't miss "Daffy's Elixir".
1. Ziegfield Station
2. The Blood Club
3. Mrs. Gracy's Revenge
4. The Number Game
5. Riding the Shadow
6. The Ceiling on the Wall
7. The Wicked Frontier
8. Song of Stab
Posted by Haper at 3:46 PM 2 comments: