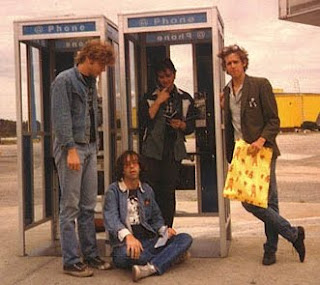 Here is part two of fantom's excellent guest post of dB's rarities. The dB's were alternative pop group who released a series of essential pop albums during a period that spanned the early 80's to the early 90's. For the uninitiated, I'd recommend picking each of their official releases, "Stands for deciBels" (1981), "Repercussion" (1982), "Like This" (1984), "The Sound of Music" (1987). Each are classics of the genre.

Lead songwriter/singers Peter Holsapple and Chris Stamey also released a pair of essential releases as a duo I'd also recommend picking up "Mavericks" and "Here and Now". An exciting new dB's album entitled "Falling Off the Sky" has been recorded and is scheduled for release later this year. A few tracks have dribbled out in advance of that release.

Fantom's post today is the second in a series of a posts of rare tracks that are essential to the completist amongst us who must posses every recorded second. Thank you Fantom!

Thanks for the warm welcome, Haper - here's the promised sequel. Hopefully playlist file will keep things better organized this time.

1. Excitement - We start with The dB's playing Feb. 22, 1982 in New York what would become one of Chris Stamey's signature songs when he shortly thereafter went solo.

2. Lord of the Manor - Holsapple and Stamey covering the Everly Brothers, Aug 25 1990 in Winston-Salem

3. What I Dig/Espionage - The dB's succeeded several other combos that included Holsapple, Stamey, Will Rigby or Mitch Easter in various combinations, and some of their songs made it into early dB's sets. Here the band segues between two Sneakers songs, Dec. 28, 1979 in Winston-Salem.

4. This Crazy Town - An odd track from a widely circulated collection of demos said to be from 1983/1984. Something from a cancelled soundtrack?

5. Seeing Eye Dog medley - One of my favorite Holsapple tracks from The H-Bombs, another pre-dB's combo

6. The World Keeps Going Round - Cover of the Kinks, dating I believe from 1979, off a tape that mysteriously surfaced in the college radio station mailbox

7. Ask for Jill 3-D - Stamey, with Matthew Sweet and Don Dixon as The Jacks, deconstruct The dB's song on the legendary Luxury Condos, Coming To Your Neighborhood Soon compilation

8. Do You Believe in Magic - A more straight up cover from Holsapple and Stamey, from June 21, 1991 in Atlanta

9. Diamond - The dB's take on the Golden Palimono's track (written but then not sung by Holsapple) at the 1988 reunion of the original lineup

10. House Is Not A Home - Another H-Bombs treat

11. Let's Live for Today - Sneakers themselves in a cover

13. Angels - Holsapple and Stamey on killer track from their first album, on Best of Mountain Stage Live, Vol 5

15. Money from England - The H-Bombs at Duke University, March 1978. Prescience about the dB's Albion contract?

17. Elvis, What Happened? - This time, Holsapple under the guise of Mr Bonus, from Luxury Condos

23. Death Garage - The dB's take on track from single Holsapple released before joining the dB's, Oct. 20, 1981 in Greensboro

25. My Baby Does Her Hairdo Long - The standout track on the whole Bible of Bop, an unusual 1982 album Kimberly Rew split between tracks with The Soft Boys (his fabulous old band with Robyn Hitchcock), The Waves (his then new band with Katrina,
yes)... and with the dB's.
Posted by Haper at 10:42 AM 9 comments: 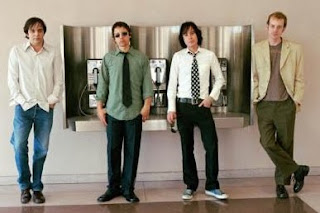 It's almost here. The new album by Fountains of Wayne "Sky Full of Holes" will be out in the next couple of weeks and from what I've heard so far, we have a serious contender for Power Pop album of the year! The new set of songs are filled with Fountains of Wayne's trademark stories of quirky characters and absurd modern life. Of course there are plenty of hooks and this time there are a quite a few allusions to summer fun. In fact, it really seems like they planned this release to correspond with summer in the northern hemisphere. Looking forward to hearing the full release when it comes out.

As is customary around here, I put together a compilation of some of the more recent b-sides, bonus tracks and songs played on American TV in anticipation of the official album release. None of these tracks can be found on "Out of State Plates" the official collection of B-sides released in 2005. For fans of Fountains of Wayne more rockers, you'll want to listen to this collection. Its a nice up-temp balance to the more mellow new album. Let me know if anyone has any rare tracks I'm missing! 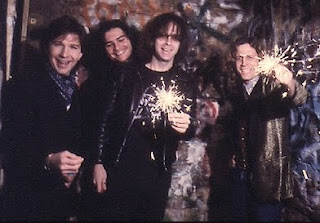 Today, I'm honored to be able to present a guest post from fantom, a valued friend and poster to this blog. Fantom, I loved the tracks and learned a bunch to boot. Thanks much.....Haper

So afraid need to give some context to these first few. If Like Flies on Sherbet perhaps comes unexpectedly to mind when the mp3s start to roll, there's a reason. The tale begins in early 1978, when the first pilgrims made their way to Memphis to pay homage to Big Star, not long departed and with its legend hardly born? ?--? three classmates from Winston-Salem: Mitch Easter, Will Rigby and Peter Holsapple and tracked down Chris Bell and Alex Chilton, who was then recording Like Flies. (Some months before Chilton had been playing and recording in New York with fellow classmate Chris Stamey...)

The Memphis trip made a deep impression (see Will's recollections) and Holsapple moved to the city for a time and recorded a number of tracks with Chilton (Holsapple in turn backed Chilton up on a few tracks found on bootlegs like Beale Street Green.) Not long after, Holsapple joined Stamey, Rigby and Will Holder in New York, where the dB's had just gotten underway.

I've been under the sway of the dB's ever since Like This hit my ears just as they were starting to stretch open in high school. They were the first band I went to see in a club and I put together an eight-hour tribute to the works of Holsapple and Stamey at the peak of my college radio years. I even went to work in Winston-Salem for a while - not really because of the dB's, but did manage to see Holsapple play on my birthday.

The zip compiler decided the order of tracks to this collection, for worse or better....

1. Crimson & Clover - a rude cover from the Chilton sessions to kick off with
2. The Fight - early prototype of the dB's track, from the Chilton sessions
3. You Said To Me - a nice original, as far as I know, from the Chilton sessions
4. I'm Not Lying - more from the Chilton sessions
5. Couldn't I Just Tell You - Holsapple in the guise of The Guild, from the For the Love of Todd tribute album
6. You Just May Be The One - from the Here No Evil Monkees tribute
7. Ups and Downs - demo for the Repercussions track, with much different approach to the song (and a bit much drum machine)
8. Pushing It Back - demo from the The Sound of Music sessions
9. Paper Hat - Rigby's tribute to Chris Bell, from his solo EP for the Hello Recording Club
10. Bride School - The first of our Holsapple demos from the late 1980s or early 1990s
11. Genericola - The jingle that never was, from same period
12. Get Used To It - ditto
13. I Look For You - a poor quality copy of Holsapple's contribution to the Bonograph Sonny Gets His Share tribute album -- that actually would have fit nicely with Mavericks
14. I Want To Learn To Waltz With You - Holsapple singing song that would appear on the Continental Drifters' Vermillion with Susan Cowsill leading on the mike
15. Leave My World Alone - a mysterious dB's demo from 1982
16. Lousy Lay - Annoyingly, I can't remember the story on this Rigby release and even Google barely mentions
17. No Time - Holsapple from the Lynne Me Your Ears tribute
18. Rendezvous - demo of the Like This track
19. Taken - a dB's demo of the track that would later end up as a duet on Mavericks
20. Theme from Insomnia - an instrumental demo from late 80s/early 90s
21. Your Walkman Looks So Good On You - ditto
22. You've Been On My Mind - feels like a cover... a Chilton session track that made its way to me separate from the others so the zipper's closing out with it