Cotton Mather - They're Back (Really) 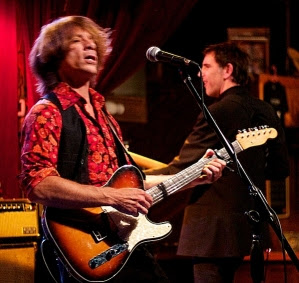 I recently had the chance to see two amazing performances by Cotton Mather.  The band has recently reunited to support a deluxe re-release of their 1998 classic album "Kontiki".  This is no "play the hits" nostalgia trip tour.  During the shows I saw, the band kicked with purpose as they reeled off one Beatle/Badfinger/Big Star influenced number after another.  Bassist Josh Gravelin is up and down his instrument recalling the late John Entwistle.  Guitarist Whit Williams soars with short bursts of psychedelic punctuation,  Drummer Dana Myzer is a pro - propelling the band with force and precision and Robert Harrison is truly back after his five year stint is chief alchemist in Future Clouds Radar.  (He looks 15 years younger since losing his Future Clouds wizard beard.)  He cycled through the Cotton Mather back-catalog in his typical Lennonesqe timber, jumping and spinning and generally providing strong focus for this great band.  This band is on and they really deserve a position among the Power Pop elite.

For me the biggest news is that the band is recording an album of new material. I couldn't be more excited.  I loved the tunes that Robert wrote during his Future Clouds days, but there is something more compelling with them being performed by a premier rock band.  The release is supposed to happen next spring.   Until that time, we've been treated to an appetizer of new tunes, in the new digital and vinyl single release of:

1 I'll Be Gone -  a classic Swedish Power Pop rave up originally written and performed by Ola Framby and the Girls.
2 Animal Show - a new slinky rocker.  The band rocked hard on this one during their recent performance

I've pulled together a compendium of recent live Austin recordings from the reformed band.   Thanks to the folks at KUT who broadcast the first five tracks.  They are truly studio quality.  Thanks also to the posters of the remaining four live performances on YouTube.   The handheld recordings still capture the power of this classic quartet.   Really looking forward to next spring's new Cotton Mather release.