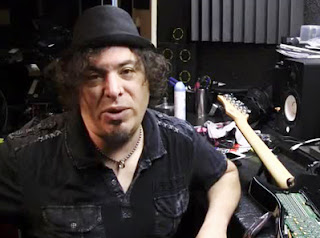 Every January I look forward to combing through the "Best Of" lists from my favorite blogs.   It's always exciting to discover Power Pop releases you missed (even if its a bit discouraging that you missed them).   I particularly love combing through the "Best of" lists from Steve at Absolute Powerpop and Aaron's Powerpopaholic blog and I always appreciate Aaron's posting of David Bash's expansive Top 125 list.

This year, I've particularity been enjoying a couple of 2015 releases I missed. I'm loving "Make Me Over" by A Fragile Tomorrow.  Quite a step for that young band.   I'm also loving the latest album from Saul Zonana, "Devolving".   Saul is a favorite of mine and his latest album is just great. It should have easily made into my top Power Pop albums last year, had I not missed it.  Only nine tracks this time but eveyone a gem.

I've loved every release Saul's made in his 15 year recording career.  He always manages to weave in great chord progressions into smart pop songs. In recent years, he's incorporate some prog elements but he hasn't lost his pop smarts.  I'd recommend every album he's released.  Saul does a great job of distributing his music and you can purchase almost every track he's released on his web site.    I've compiled just a few tracks he hasn't officially released.  These are the audio from several "live in the studio videos" that he recorded in his home studio in Nashville last year. Great tracks.  If you don't know Saul's music, consider these a taster.  You'll want to purchase the rest of this talented artist's catalog.