The Bigger Lovers Are Back! 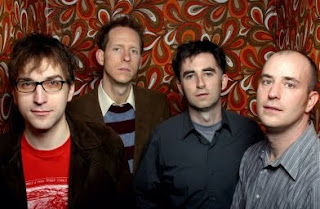 Very excited to hear the new "Little Giant" EP from the Philadelphia band "The Bigger Lovers". From 2000 through 2004 the Bigger Lovers released three classic Power Pop albums "How I Learned to Stop Worrying..", "Honey in the Hive" and "This Affair Never Happened". All are in print and are very much worth your time - if you haven't heard them.

The band produced a potent mix of alternative rock that demonstrated echos of 80s/90s bands like the DBs and Let's Active. Listen again and you could also hear elements from 60s bands like the Who and the Kinks. In 2005 the band played their farewell concert and called it quits. Band members scattered to become members of the other bands. (Notably, drummer Patrick Berkery became the drummer for the Pernice Brothers.)

The announcement of new Bigger Lovers material is big news at Pop Fair. To celebrate here is my collection of Bigger Lovers B-sides, Demos and Compilation tracks:

Great stuff. Hope the band puts out a full album and tours.
Posted by Haper at 12:42 PM 4 comments: 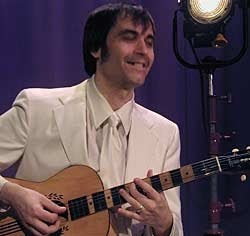 I received several comments about the order of my Top 25 list for last year...and I started second guessing myself. So I went back and listened to my list. What a great year in Power Pop it was! I also confirmed my top choice.

For me the new effort by Mark Bacino takes top honors. Queen's English"" is simply the best written and fully realized Power Pop project of 2010. Mark successfully channels 1960s and 1970s American pop tradition into present day. I hear lots of Harry Nilson references. Lots of Beatles and Beach Boys influenced tunes. The album is beautifully arranged with nice brass and strings throughout. It also sounds great too. Mark has a business in music production and has turned it up on his own project. If you regularly check-in with this blog and don't have this album, stop right now and go get it!

Some of the highlights. "Queens English" is nice rocker recalling "Saturday Night's Alright for Fighting". "Happy" is the first of three tracks influenced by Harry Nilson. (Harry seems like a big influence on Mark.) "Muffin in the Oven" sounds like Owsley's "Uncle John's Farm" (which always sounded like "Saturday in the Park" by Chicago to me.) "Camp Elmo" is the second of the Harry Nilson type tracks. "Angeline and the Bensonhurst Boy" is another of my favorites. A nice mitempo shuffle with a great Jellyfish-style refrain. "Bridge & Tunnel" is the third Nilson style track. "Blue Suit" a sleeper and another favorite of mine. It's an acoustic Bossa Nova number that sounds like some of the more recent efforts by Nashville band, Swandive

All and all a great album! Can't get enough. Here are some demos and commercial jingles from Mark that helped complete my collection: (Recently Re-Upped)

Mark has posted liner notes for the compilation at his blog. Thanks Mark for letting us post this!
Posted by Haper at 7:52 PM 7 comments: