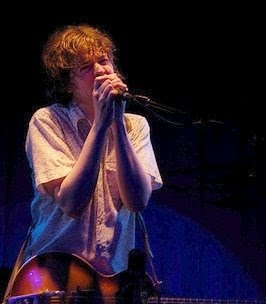 Jon Brion has released precious little considering his influence in the Power Pop world. After his work with the Grays in 1994 it took seven years for his solo tour-de-force "Meaningless" to finally see the light of day. The rumors of that album preceded its actual release by several years. Individual tracks kept leaking out slowly on the Internet.

When it finally was officially released, Meaningless was indeed a masterpiece. A hand crafted set of originals and covers that showed how Jon's work been a critical part of the Gray's sound. In them, you also clearly heard his influence on the sound of Aimee Mann's first few solo
records.
Of course, Jon's career since that time has focused on high profile producing jobs (Fiona Apple, Rufus Wainwright, Kanye West...) as well as his extremely successful career in scoring films. In those films he has tantalized Power Pop fans by seeding a few great Jon Brion vocal tracks among the instrumental pieces. Great for faithful collectors, but frustrating for everyone else waiting for his next solo album.
As a stop gap, I've collected all of the vocal tracks so far from Jon's soundtrack efforts here along with a track each from a Queen Tribute album and a Hollies Tribute album. Please let me know if you know of something that I am missing. To pad out the collection, I've also included a solo performance that Jon did for KCRW.
Jon Brion - Strangest Times

This is great stuff and I think the collection hangs together well. For true Jon Brion collectors, there is very little new here. For the Power Pop fan new to Jon Brion's work, try these tunes and let me know what you think.
Posted by Haper at 9:26 AM 5 comments: