The Grapes of Wrath - B-Sides and Bonus Tracks 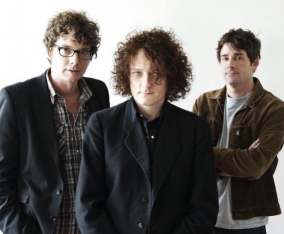 There has been quite a bit of buzz in the Power Pop world about the new Grapes of Wrath album "High Road" and for good reason.  The Canadian band has reformed after a 13 year hiatus and have delivered a compelling power pop effort that's strong throughout.  Co-leaders Tom Hooper and Kevin Kane have again buried past differences (they had a brief reunion in 2000 for the album Field Trip) and have come together with an effort that leverages the best of the Grapes trademark jangle sound.   As I write this, High Road has only been released in Canada but non-Canadians can still get the album.  We can stream the effort from the CBC here.....but you will like what you hear and can buy downloads here.

In honor of the effort, I've assembled a collection of B-sides and bonus tracks.   The collection features a number of tracks from the rare bonus EP that accompanied 2000's  album "Field Trip".  A number are rearrangements of previously released Grapes tracks from the 1990's.   A few are covers.  Three of the tracks are from the album "Suddenly I Came To My Senses" by Ginger.   Ginger was Tom Hooper's effort after Kevin Kane left the band the first time.   I've included the most "jangly" from that effort.

Enjoy the compilation but I recommend getting the new album.   Great effort.
Posted by Haper at 7:55 PM 5 comments: