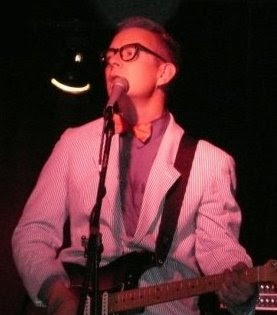 To accompany Fresher Tin Villages, I've assembled a sampler of Preoccupied Pipers tracks with KC singing lead. This is great stuff, not to be missed. If you haven't heard him before, you are going to want entree into KC Bowman's world.
Posted by Haper at 3:16 PM

a young gentleman told me about this talented fella at an outdoor recital.

Yep I love the new tracks on Facebook. Particularly like Pioneer Playfaire. Great to know there are new KC tunes on the way...

Wonderful KC. Thanks much for sharing this. What's the latest on the new PP album? Any plans for a number 2 solo album?

Constantly recording new stuff...just never sure what to do with it, other than post it on the PP facebook streaming music player, and/or post it for download on my box.net acct. I'm not quite organized enough to put together an album proper, either under the PP banner or the KCB banner...

KC. What kind of motivation would be enough to pull together a collection of your tracks and issue it electronically? There are a number of great Power Pop blogs (and their readers) that appreciate your work. I for one would love to hear and promote your work.

here is a brand new KCB track for you to enjoy. I have been working with The Corner Laughers in what we are headily regarding as a supergroup...

Thanks KC. I continue to love your songs. We'll post em anytime you want... (By the way I like the acoustic version you have streaming on your site also).