The Shazam - Tribute and Demo Tracks 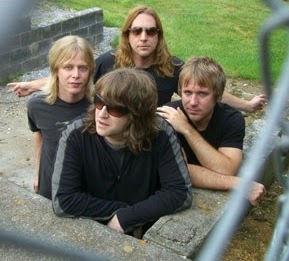 I miss the Shazam.  One of the best of the early bands signed to Bruce Bodeen's "Not Lame" label,   The Shazam channeled classic 60's rock (The Move, The Who, The Kinks and of course the Beatles) into an updated and relevant rockin' Power Pop sound.  The Shazam were active between 1994 and 2009 and produced four full length albums and one EP, each a classic.   In 2010 lead singer Hans Rotenberry put out a great duo effort with Nashville producer Brad Jones entitled Mountain Jack.  One of the best albums of that year...

I'm hoping for a reunion or simply the next fine effort from Hans Rotenberry.   Until then,  I've collected a set of Shazam studio tracks from various tribute records.   I've also included three tracks from their 1995 demo cassette "Shake 500" not released on subsequent albums.   Enjoy this compilation and let me know about any track's I'm missing.

I'd like to see the Shazam come back with a live song on the TV show Nashville, to give them the exposure they deserve, then a US tour. Thank you SO MUCH for this compilation. Please come back and tour, guys. I want to see what I missed. I never thought I would say this, but their version of "the concept" by teenage fanclub bests one of the best bands of all time in their prime! thanks again for putting these comps together.

They just opened for Pugwash on the west coast so looks like they are still around.

- track 10 has a real name and it is "Generation Zzzz" not 'A to B'. https://www.youtube.com/watch?v=A6ogBvuolmo

- "I Can See For Miles" - there are 2 different mixes of this song: one is on the New Sell Out and the other version is exclusive to the "Here's To All The Misfits" EP

- Hans Rotenberry guests as a 2nd vocalist on the Gene Clark tribute CD; the song is "When Time Stood Still"


If you're collecting tracks from officially released various comps, you've missed these:

- Where Do We Go [acoustic] - Calling Sydney single RQTZ 038 https://www.youtube.com/watch?v=g6ub87KHuRQ

- Out Of The Blue [rescued from cassette] - Popgun 2000 SCACD 124 same version found on Not Lame's 1997 Shazam self-titled disc with bonus tracks.

- Blew It [Japan mix] - Shazam promo CD-R released with Meteor in 2009 from Not Lame https://www.youtube.com/watch?v=Wy6z-CUzaHY


There was also an interesting promo that is 'out there' from 2000 called 'Demos' that was a Rainbow Quartz CD-R.
It is basically a Rev 9 album of rough mixes.
While I believe the tracks aren't demos - they are in fact just different mixes - or rough mixes/test mixes but not true demos in the sense of minimal audio production that is indicative of a demo.